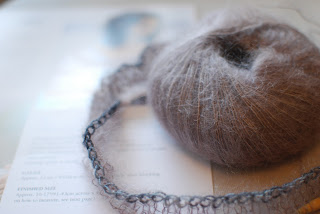 On Saturday I went on a yarn crawl, maybe more of a stagger than a crawl. We met at 88 Stitches in Langley and did a bit of damage. I was there a few weeks ago and wanted my friends to enjoy this friendly store.  I bought Malabrigo for another Moody Kerchief, some Kidsilk creation and the new Jane Austen Knits magazine by Interweave Press.  S and I were done long before J could deliberate, but that's our normal. Great lunch at Mozarts. 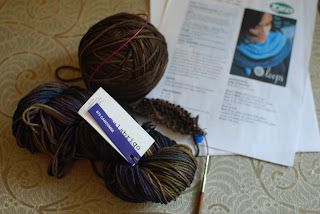 Then the unfortunate trip to Port Moody and Black Sheep. I thought we would go back on the Trans Canada Highway and cross the Port Mann bridge to double back. Because of the Fraser River, the roads are not direct, even though the stores aren't far as the crow flies. But S is more local and wanted to take the new Golden Ears bridge. I said fine, but I can't navigate in Maple Ridge/ Pitt Meadows. Well, apparently, with all the heavy rains, the lane and signage changes, she can't either. I have proven that I will follow her anywhere, even down a dead end gravel road.
It was like being in an old X-Files episode. Partly because we're watching the old seasons, and partly because this is where they were actually filmed.
By retracing our steps (and driving in circles almost an hour) we made it to the most charming, bright and friendly Black Sheep shop. Well worth the adventure. 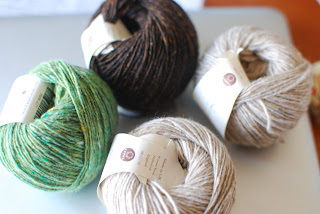 I added more Kidsilk Haze and the Mohair Bias Loop pattern to the basket, as well as some Rowan fine tweed and two copies of Coastal Knits (one for a gift).
The store samples were exquisite. I think I'll rip out the stocking stitch of my Dahlia because the rowing out is too obvious. I can do better. 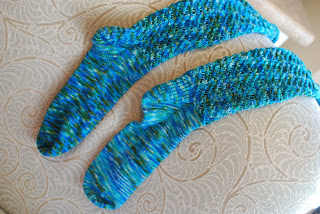 I cast off the long neglected socks and cast on the Kidsilk  Creations scarf. Not sure if I want to wear it or give it away. I feel a bit 'clownish' in it, but a more sophisticated person could carry it off. 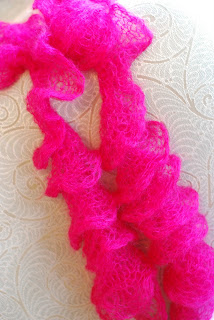 I also finished knitting for my great nephews. Squeee. I can't show just yet. Lurkers, you know.
I'm working on the Moody Kerchief and the Mohair Bias loop. Just bought another scarf so my  Xmas knitting list is shrinking! That's one way to complete a list.
Posted by LoriAngela at 1:39 pm 2 comments: It's American Thanksgiving, but I got to do a little Black Friday shopping in downtown Chilliwack this morning and we had a lovely, sunny day to be thankful for.
I'm thankful the plasterers are gone last night, though they finished at 9 last night. All their plastic barrier and drop cloths are gone with them, but a lot of dust remains. Today I washed and painted the wall below their fix. It happens to be our fireplace wall, our feature wall. I'll have to do a second coat where the plaster meets the ceiling. 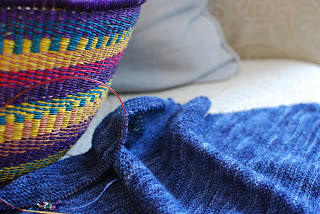 I am done the endless beginning of a non-Christmas gift. I knit a couple of Santa hats and maybe squeed a little. They are charming and the opposite of a raft of garter stitch. I may be making one for me to wear at work. Is it OK to be silly at hospice? I also have a Snoopy scrub top. 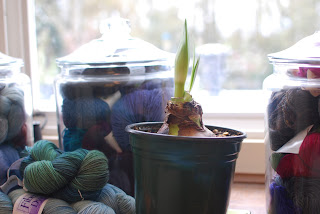 The amazing amaryllis is outdoing its predecessors. Never have I had a bulb before December. To celebrate, it is now in a sweet Christmas pot. Don't worry there will be more pictures as it grows like corn. 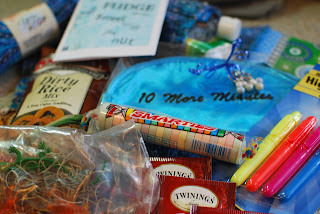 And a package arrived from Louisiana as part of our Knit Girllls afghan square swap. A huge package from ScottieGirl1 on Ravelry. She knit me a beautiful, soft, blue square and added so many goodies. We laughed about the American "Smarties", nothing like the ones I grew up with. I'll make the family BBQ shrimp with Dirty Rice as a treat. I'm allergic to sea food, but they love it.
And I am thankful for friends and family. Every day.
Posted by LoriAngela at 5:13 pm 1 comment: 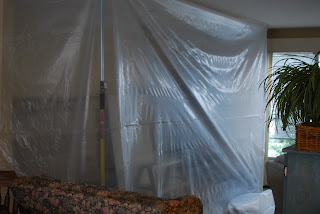 Havoc.
Everything is topsy turvy as the workmen fix the leak in the ceiling over our fireplace. Furniture is shoved against the wall, the table is full of mantle items.
On Thursday J came over for  knitting because I had to answer electrician questions. He must be a very desperate electrician to need answers from me. On Friday I hid in the basement and took back my crafting cupboards, moving them to the old play room and reorganizing them. Please don't touch them (don't open the cupboard and throw the stuff within a 2 meter radius!). I may have more sewing confidence now that I know where my stuff is.
I do have to say they are very tidy, but still very noisy and not easy to anticipate. Will they come this morning? Should I be here? Can I go do errands? 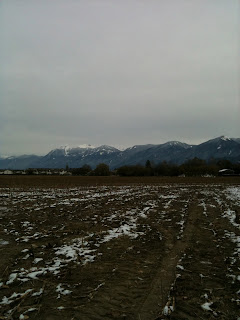 Oh, but outside. It has snowed and the snow stuck! Black ice and wind. Yes, in a turn around of a few hours, the winter arrived. It's as cold as November! Hats, scarves, mitts (with fingers). Last week I was walking the dog while wearing a sweatshirt and rain shell. I was going to do some weeding. Yesterday was full arctic gear. 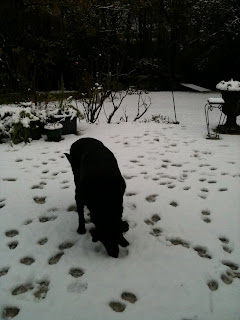 She doesn't care. She loves weather. I filled the bird feeders and suet holder. I think the wee birds are as shocked as we are.
In knitting, I am working on some epic garter stitch that is the basis for a surprise gift, so very boring to you (and to me also). As soon as I do decrease every one of the 205 stitches I will cast on a Christmas gift or a silly Santa hat. If the hat works out, it will probably go in the gift pile anyway.
Overseas cards are finally ready to post. I always have a challenge collecting addresses. Next will be completing the Amazon orders for nieces and nephews far away. Then I'll get all the contents of the gift drawer exposed and start my plotting.
Posted by LoriAngela at 9:41 am 1 comment:

And On This Path 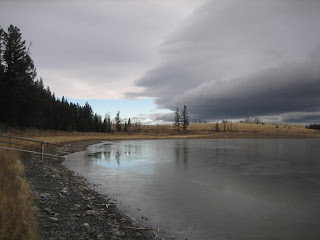 Spent the last few days in Knutsford. The weather is at least a month ahead. The Coquihalla Highway was beautiful on the way up, with snow on the side of the road and mist in the deep canyons. Long Lake was frozen, thawed, and started to freeze while I was there. 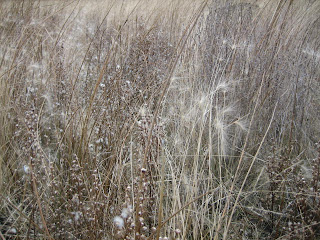 We had to walk around the lake because it was very windy and the old aspen trees are dangerous when they fall. 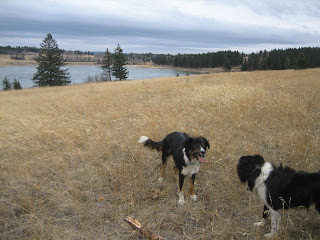 Dexter and Jake are the dogs in charge when we're outside. 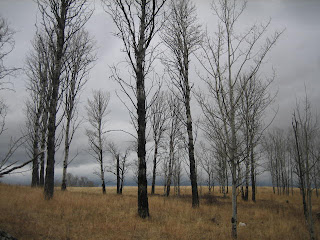 My sister kept saying, "It's not cold." But I had my Malabrigo Moody Kerchief and fingerless mitts all the time.
We went to electrictree and had a great visit with our older sister who is one of the shop owners, with her daughter. It was decided we would do a knit a long (KAL) of the Bandana Cowl from Purlbee.com. We chose Cascade Eco Wool and the suggested 16 inch circular needles. Loved the yarn, didn't like the needles. I was able to help my sister cast on in our old way, do double decreases and even venture into short row shaping. I cast off just as I was ready to go.

But even though it was beautiful in Kamloops, the Coquihalla pass was blocked by snow and spun out vehicles. After a wee bit of drama, I chose to go home by the Fraser Canyon, the Trans Canada Highway. It doesn't have the elevation for snow, but is very twisty and turny. Luckily I spotted a confident semi tractor trailer with a refrigerated box and followed him from Spences Bridge to Hope. It started to rain and got suddenly dark in Litton at 4:30. The next hour was a bit scary with tunnels and curves and steep grades, the wipers on triple and the visibility low. But, thanks to my security truck, I made it to Hope, which is almost home, and it stopped raining.
I was happy to get home to work the next day and then just relax. All roads lead to home.
Posted by LoriAngela at 3:02 pm 2 comments: 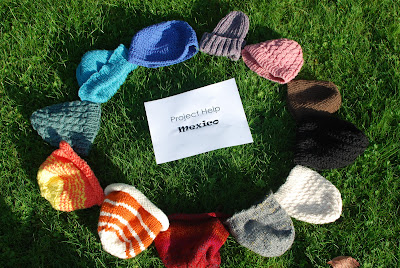 The 12 hats are finished and will go to Mexico for Christmas. Thanks to Needles In the Hay for the spectrum challenge. I was born in Peterborough, but have no memories of it. I would love this to be my own LYS (local yarn shop).
I had to finish these early so I could complete another project: KGASS, the Knit Girllls Afghan Square Swap. The next round starts in January. Maybe you'd like to join us? I have one more square to knit and gather up the goodies I have been picking up to mail. In return, someone from the group is knitting me another blue cabled square. These will become a blanket someday. Yay.
Then I can flagellate myself with Christmas knitting. Some of it will be secret. The last thing I usually do is a hat for D to lose in the barn. Already have that yarn. I am going to the ranch on Wednesday so I can do some secret knitting there. I have invited so many people to Ravelry, who knows who lurks in the dark corners?
Today I will be pleased with the win.
Posted by LoriAngela at 1:45 pm No comments:

I made the best of some rainbow yarn that was donated to our Chilliwack C ommon Threads knitting circle. Kate knit a wonderful Baby Sophisticate cardigan with this yarn, but it just hurt my teeth. I used it for highlights and stash dived for the white. We now have almost 3 layettes for the Hospital Auxiliary.
Just got in from walking the dog (we're managing the big block again, 4 miles) . We left in sunshine and by the time we passed the high school and turned the corner to head home, it was hailing. Really. Well, it is November. 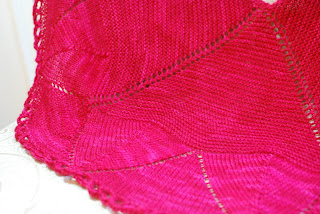 And to keep a dear friend warm and comforted, the red cache coeur (Ysolda's Damson) was cast off Saturday night at work and blocked at midnight when I got home. It was dry enough to sneak to her at church before her husband had to go on a trip. I don't know how the results of her tests went, but I would like her to know she's not alone. I am not just a fair weather friend.
Posted by LoriAngela at 3:40 pm 3 comments: 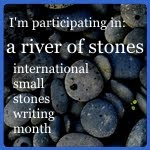